Whether you’re looking for a family vacation, romantic trip, or backpacking experience, Europe is tough to beat as a summer destination. The trouble is, airfares can be crazy expensive. In order to help get you there a little more cheaply, we’ve done a  deep analysis of summer air fare patterns to Europe using both 2013 and early 2014 data. Here are some tips we’ve uncovered:

Unlike most domestic routes where booking too early can be almost as big a mistake as booking too late, the dynamic for summer flights to Europe is different. From 2012 to 2013 we looked at  over 190 million  fares, covering 75 origin cities and 29  destination cities across Europe, Africa, and the Middle East. We analyzed fares for flights departing between June 1 and August 31 booked between one and 320 days in advance. To our surprise, we found that the best time to book was 319 days before departure on average – about ten and a half months in advance! As the graph below shows, fares stayed reasonably flat until about 7 months in advance, but then started climbing. From that point on, they just got higher and higher and really never looked back. 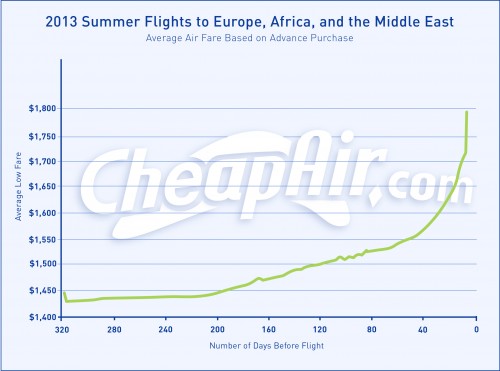 2. Be Flexible on Travel Days

Like with all trips, the exact travel dates you pick can make a really big difference. That’s especially true to Europe where the fares are so high that a 5% savings is significant and a 10% drop can be well over $100 per ticket. Saturdays are generally the most expensive days to fly, followed by Friday and Sunday, and then Monday and Thursday. Tuesday and Wednesday are the cheapest. But there are all sorts of anomalies. Some days flights might be more expensive to your destination because there is a big group on board taking up all of the lowest fare seats. So don’t assume that the fare you see for the first set of dates you check is the fare you have to pay. Check as many combinations of dates as you can, you’re likely to see big differences.

Sometimes the cities that you fly from or to can have a big impact on your fare. On the U.S. side, try to fly from a major city, if you can. You typically pay a premium on Europe flights when you fly out of a small airport. If you live near a small airport but there is a larger airport within driving distance, the drive may be worth it.

At the other end, bear in mind that some cities in Europe tend to be less expensive than others. Where the best deals are vary every year, but we’ve looked at fares found in the last month and here are the average low fares by destination:

Another point to consider: Europe has some great low cost airlines. If you are going to a particularly expensive city, once in a while you will come out ahead by buying a ticket to a major gateway, like London, and then buying a separate ticket on a European carrier to get to your final destination. These low cost European carriers, that only fly within Europe, are not available on CheapAir.com or most U.S. web sites, so you typically have to go to them directly. Two examples are RyanAir (www.ryanair.com) and Easyjet (www.easyjet.com).

As of now, there is a big difference in prices depending on which part of the summer you travel in. The best fares available are for travel in the later part of August. (September would be even better, but that’s outside of our study.) If late summer doesn’t work for you, very early summer isn’t too bad, either. By very early, we mean the early part of June. Prices are at their peak from about mid-June to mid-August so if you can avoid those that will be great. Of course, we realize that’s the bulk of the summer, so for many of you that won’t be possible.

5. Fly Into One City, Out of Another

If you’re planning to travel to multiple countries, sometimes it makes sense to pick where to begin and end your trip based on the cities with the lowest air fares. Also, keep in mind that you can usually fly into one city and out of another without paying a penalty for doing so – the fare ends up being just an average of the two prices. So if you are planning a trip across Europe where you start in London and end in Rome, don’t feel you need to buy a round trip ticket and then get yourself back to London. You can buy an “open jaw” ticket that goes into London and out of Rome which will save you time and money in the long run.